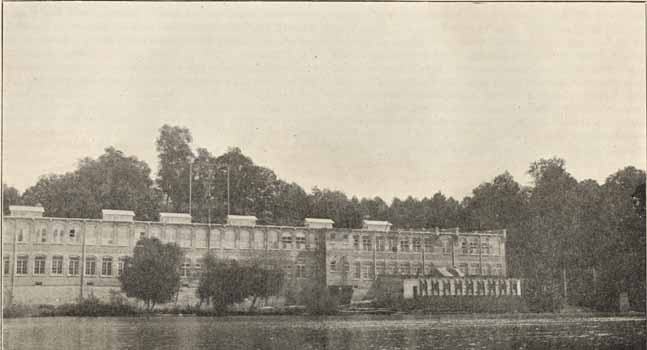 The East Monbo Cotton Mill closed in January of 1961 due to the formation of the Lake Norman. The lake overflowed onto both sides of the river, covering both the East Monbo and Long Island mills, both owned by Duke Power and operated by the Superior Yarn Mill company.

Note: The East Monbo Mill should not be confused with the Old Monbo Mill, which was destroyed during a massive 1916 flood.

The East Monbo Mill was owned by the Turners until 1919, when it was sold to Superior Yarn Mills. By 1920, the mill had about 350 employees living in the East Monbo Mill village.
The mill operated off of water flume/waterwheel for decades, so it was very close to shoreline of the river.

An example of a Mill House at East Monbo, circa 1920

A group of East Monbo Mill employees, circa 1920

At the time the East Monbo Mill closed, it had 132 regular employees, most of whom lived in the East Monbo mill village. The homes making up the mill village, which were owned by the mill, were offered free of charge to their occupants at the time of the closing provided the occupants could pay to have the home moved outside the area that would be flooded by the lake. Because they were made of wood and would cause floating debris after the flooding of the area, the houses that were not moved were demolished.

Some of the machinery at East Monbo was moved to the Mount Holly plant operated by Superior Yarn Mills, but much of the heavy machinery, which was older and somewhat outdated, was left behind, bolted to the floor, when the mill was demolished prior to the flooding of the lake.