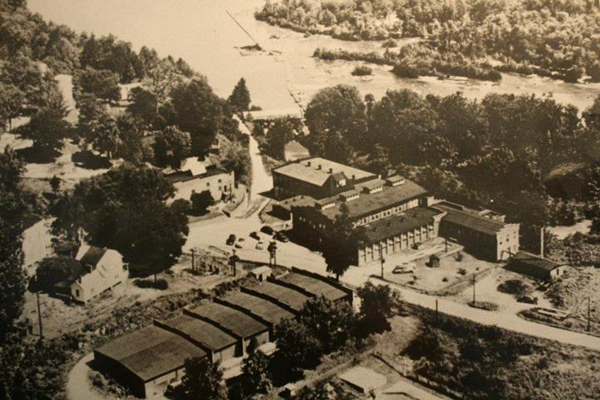 The Long Island Mill was founded in the mid-1800s by John J. Shuford, one of the earliest cotton mill builders and operators in North Carolina, and Avery M. Powell, a physician, planter, and business man.

About 1881, the mill was sold to the Turner Brothers for $7,000 and they operated the mill until 1888 when they sold out to Jim Brown, who came to the United States from England. Brown operated the mill himself until 1894 when he was killed by two of his mill employees when he caught them robbing the company store. At his father’s death, Osborne Brown, the eldest of the Brown boys, took charge of the company and in early 1900, a new brick building was built, along with a new addition. Enlarging the mill called for more power and in 1919, a new concrete dam was completed to replace an old log dam across the Catawba River and new water wheels were installed to replace the old nudershot wheel. In the late 1920’s, [Brown’s] health began to fail and he sold out to Duke Power Company which also owns the East Monbo plant. The plants were leased to Superior Yarn Mills.

At the time the Long Island Mill closed, there were about 120 regular employees (about 54 families), most of whom were born and raised in the Long Island community, working for the mill. For the most part, employees and their families lived in the small village of Long Island adjacent to the mill itself. The village included an old company store, a post office, and a number of white, frame, mill houses. The homes, which were owned by the mill, were offered free of charge to their occupants at the time of the closing provided the occupants could pay to have the home moved outside the area that would be flooded by the lake. Because they were made of wood and would cause floating debris after the flooding of the area, the houses that were not moved were demolished.

The mill itself was a large red brick building, which at its height housed 4,632 spindles. The mill was water powered from its construction around 1900 until 1945, and was therefore very close to the banks of the Catawba River. Prior to flooding, the mill building was demolished and most of the machinery was moved to the Superior Mills Mount Holly plant.