Davidson’s Alma Mater is titled “All Hail! O Davidson!” The words were written by Dr. George M. Maxwell, class of 1896, and by 1938, Dr. James C. Pfohl had arranged the lyrics in hymn form. The original lyrics are as follows: 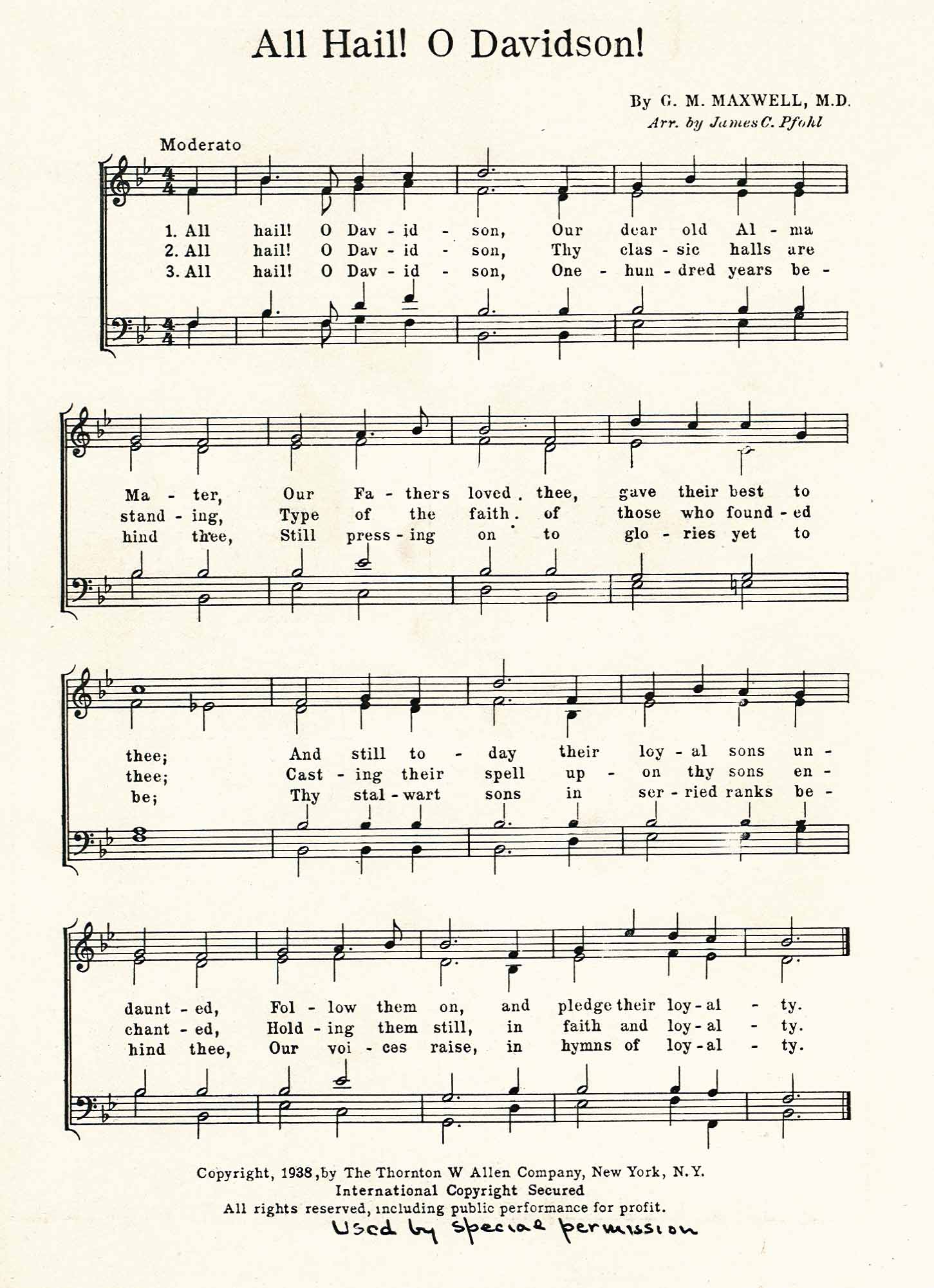 All hail! O Davidson, Our dear old Alma Mater,
Our Fathers loved thee, gave their best to thee;
And still today their loyal sons undaunted,
Follow them on, and pledge their loyalty.

All hail! O Davidson, Thy classic halls are standing,
Type of the faith of those who founded thee;
Casting their spell upon thy sons enchanted,
Holding them still, in faith and loyalty.

All hail! O Davidson, One hundred years behind thee,
Still pressing on to glories yet to be;
Thy stalwart sons in serried ranks behind thee,
Our voices raise, in hymns of loyalty.

This version of the song was copyrighted in 1938, and it was printed in football programs, the Wildcat Handbook, and the Davidson College Bulletin by 1952. The 1953 commencement program shows four verses, but there is no evidence to suggest that the last verse came from Dr. Maxwell or Dr. Pfohl, and in 1996, the fourth verse was officially struck from the song.

Until October of 1940, the song that everyone associated with the term “alma mater” was “O Davidson,” which was then the football song. But students and alumni agreed that it was not a suitable song, and a student vote was held to select a new alma mater. The two songs the students could select from were “All Hail! O Davidson!” and “Davidson, Our Alma Mater,” written by Fred Waring, class of 1917.

The two songs were sung by the Glee Club on October 18, 1940, and more students voted in favor of “All Hail! O Davidson!” However, the majority was not sufficient enough for it to become the alma mater, and so the decision was put aside until later. It is not clear when “All Hail! O Davidson!” became the official alma mater of Davidson College, but it was evidently considered such by 1952, when it was printed in the commencement program.

The lyrics of “All Hail! O Davidson!” have undergone a few changes since the 1950s. The first change was at commencement in 1973. With the first female graduate, Missy Woodward, the crowd spontaneously changed “loyal sons undaunted” to “loyal sons and daughters.” The change was not printed in the commencement program until 1974, and the new lyrics seem to have been accepted without any record of the change; no article was printed in the Davidsonian or the Davidson Update.

The lyrics were changed again by a committee in 1996 to reflect the gender issue and to make the wording more meaningful. The committee that proposed the changes stated that it was a “historic, if clandestine, undertaking” and requested that no official announcement be made. The revised lyrics are below, with changes in bold type: 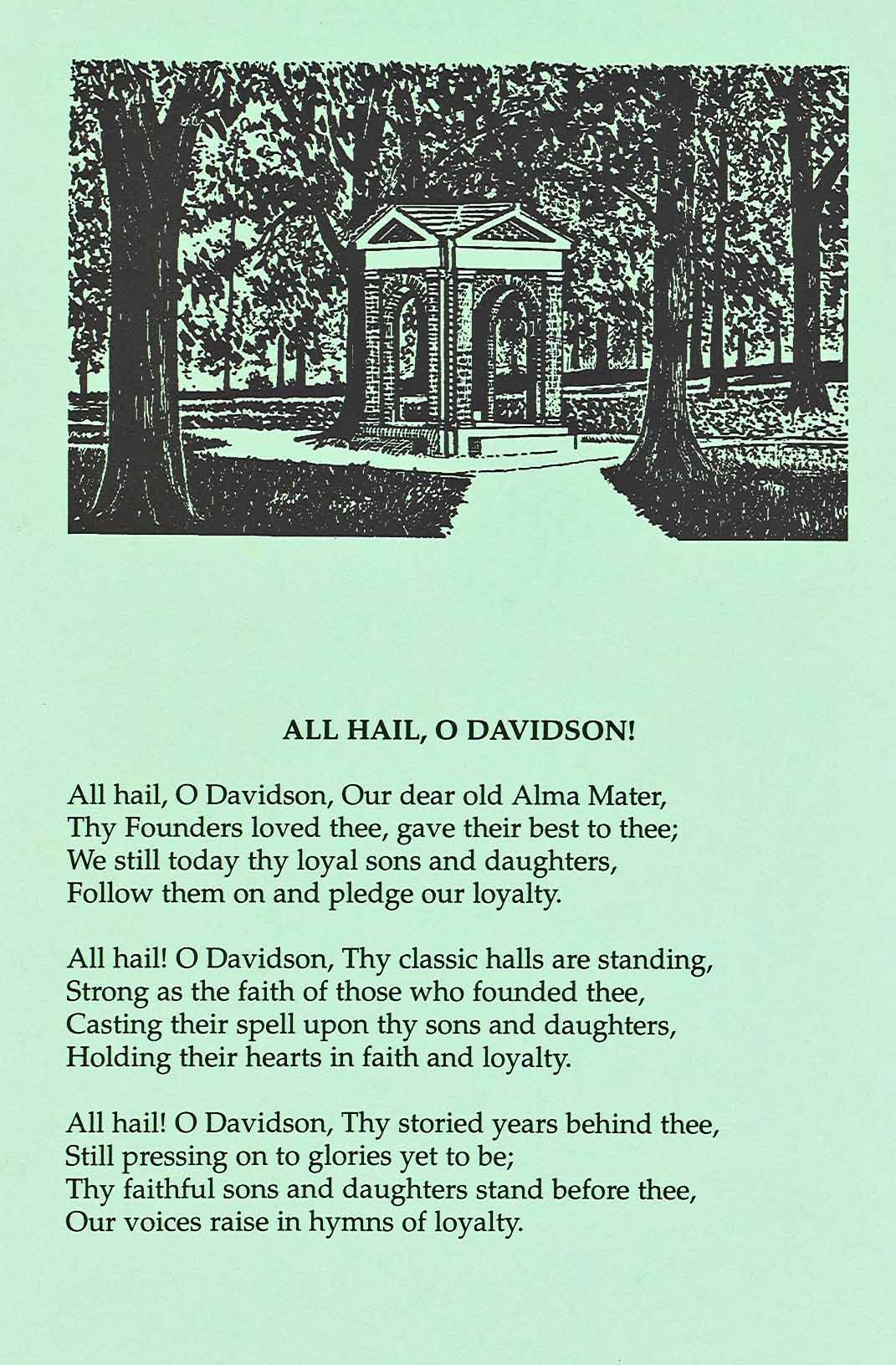 All hail! O Davidson, Our dear old Alma Mater,
Thy Founders loved thee, gave their best to thee;
We still today thy loyal sons and daughters,
Follow them on, and pledge our loyalty.

All hail! O Davidson, Thy classic halls are standing,
Strong as the faith of those who founded thee;
Casting their spell upon thy sons and daughters,
Holding their hearts, in faith and loyalty.

All hail! O Davidson, Thy storied years behind thee,
Still pressing on to glories yet to be;
Thy faithful sons and daughters stand before thee,
Our voices raise, in hymns of loyalty.

In the past few years, there has been a growing movement to get students to know the alma mater before they have to sing it at commencement. In 1996, the committee pushed for “All Hail! O Davidson!” to be printed in the programs for the spring and fall convocations so that students would have a chance to learn it. John Syme also highlighted this issue in his blog entry for the Davidson Daybook.