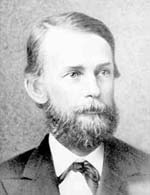 During his presidency, Hepburn abolished the master of arts degree and instituted curricular reform, especially in the area of language and Bible classes. Hepburn, also, introduced the concept of an honor code in 1880. The first Davidson College Presbyterian Church (DCPC) was built during his presidency. He was the last president to serve as the minister at DCPC. Hepburn resigned his presidency in 1885 and returned to the University of Miami as a professor of English literature.