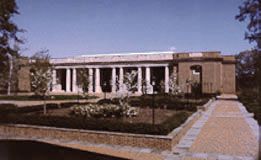 Quote: The E. H. Little Library, planned for the future, has many links
with the past. The literary societies, which had assembled the first libraries
at Davidson as early as the 1830’s, were memorialized with handsome insignia
at either end of the loggia. The Peter Stuart Ney seal in handsome brass
ornaments the entrance lobby. The Davidsoniana Room, containing publications
by and about Davidsonians, is handsomely appointed, as is the Rare Book Room,
dedicated to the memory of the four Smith brothers, all Davidson alumni. Davidson,
Chalmers. Speech. 6 August 1974. E. H. Little Library Davidsoniana File.
Davidson College Archives.

Named for: E. H. Little, president and chairman of the board of
Colgate-Palmolive Company.