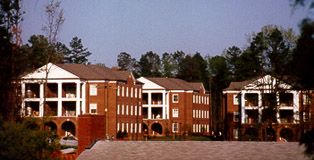 Quote: Apartment-style buildings have proven highly popular with
students. Since room assignments on campus are made on a lottery system that
gives higher priority to older students, most of the apartments are expected
to be occupied by seniors and juniors. “New Residence Halls
Begun Last Week.” Mecklenburg Gazette. 3 April 1991: 2