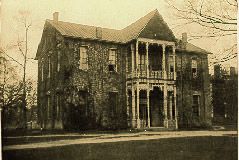 Quote: During its 55 years of service parts of Morrison hall have at
one time or another served as a Y.M.C.A., a study hall, a gymnasium, a skating
rink, a lecture hall, a dormitory, class rooms, a biological laboratory,
R.O.T.C. Armory and storerooms, and more recently has housed the student
store. It has been variously known as: ‘Morrison Hall,’ the ‘old’ gym, the
‘Eagle’s Nest,’ ‘Jackson Hall’ and ‘The Stud.’ Its wall enclosed the first
shower bath, with hot and cold water, to appear on ‘the hill.’ “Workers
Ready to Tear Down Morrison Hall” Charlotte Observer. 5 August 1945.