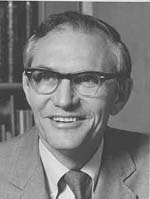 (b. 1919) The first president of the Davidson student body to become president of the college was Samuel Reid Spencer, Jr., class of 1940. After graduating summa cum laude from Davidson College, Dr. Spencer, LL.D. served in the U.S. Army during 1940-1945 and was released from active duty as a major. He entered Harvard University graduate school, where he earned his M.A. and Ph.D. degrees. In 1951, Spencer returned to Davidson to serve as assistant to President Cunningham. After three years at Davidson, he was named Dean of Students and Associate Professor of History, advancing to full professor in 1955. He left Davidson in 1957 to become president of Mary Baldwin College. From 1966 until 1968, he served on the Davidson College Board of Trustees. In 1968, he returned once again to Davidson and accepted the office of presidency.

The years of Spencer’s administration were years of positive change for the college. Between 1968 and 1983, Davidson witnessed the introduction of co-education, the active recruiting of minority students, the establishment of the self-selection social system for fraternities, the emphasis on faculty research, and the development of foreign study opportunities for students. In addition, Spencer increased the endowment from $13.8 million to $30 million. Enrollment, also, increased from 1000 students in 1968 to 1350 in 1983.