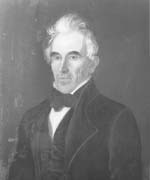 (b.1795 d. 1882) Reverend Samuel Williamson, D.D. came to Davidson in 1839, joining the faculty as professor of mathematics and natural philosophy. Having been an outstanding scholar at the University of South Carolina and South Carolina College, Williamson became minister before accepting the Davidson professorship. Within two years of serving the college as faculty member, Williamson was elected president.

Samuel Williamson’s administration, longer than that of any other nineteenth-century Davidson president, was marked by a time of hardship for the college. The years 1841-1854 were a difficult, formative period for the college. Davidson faced great financial struggles, yet Williamson kept the college afloat with his quick-witted style, great physical energy, and love for public speaking. Recollections by former students reveal that Williamson was much loved by the students for the kindness with which he met them at every turn. During his term, he saw the construction of Eumenean and Philanthropic Literary Halls. Additionally, he ended the manual labor system.