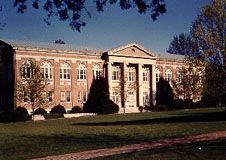 Quote: Why is the 900 Room called the 900 Room? Director of the Union
William Brown says that, “In the days when this building was a library,
the floor that is now the balcony went all the way across. On that floor the
large majority of the books… were the 900 number books, [which is] the
history section of the Dewey Decimal system.” When the Grey Library was
being converted in to what is today’s College Union, “they knocked out
the floor to open the room up and to create the space we have now,” Brown
says. Then when it came time to dedicate the new space, Brown says “some
great soul had the idea that we call it the 900 Room,” as it is known
today. Hartwell, Randy, “Question of the Week.” Davidsonian. 23
September 1996.

For more information see Around the D blog: Musical Movements and Moments.