In the Fall of 1964, the college began accepting African-American students – with 2 students entering that year, 2 in the fall of 1965, two in the fall of 1966- the pace of integration was slow and social life was difficult for the students. 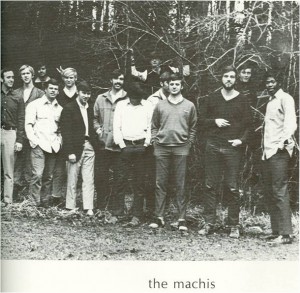 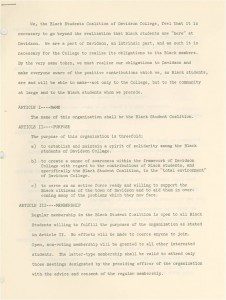 The first African-American faculty member was Charles Dockery, hired to teach French in 1974. African-Americans began appearing as staff members outside of physical plant with Junior Wade and John Wade as coaches in Athletics and Leonard Satterwhite as an Admissions counselor. 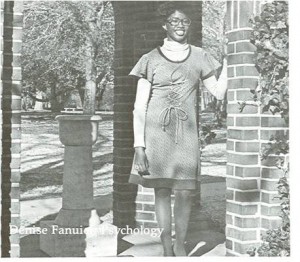 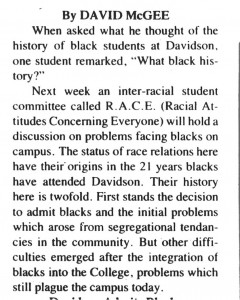 With the full integration of racially diverse students at Davidson, the campus began initiatives to support minority affairs at Davidson. On March 28, 1980, the President’s Committee on Minorities held its inaugural meeting in the College Union conference room. The committee consisted of students, coaches, faculty and staff. Such initiatives were aimed to reduce the problems which continued to “plague the campus” as one Davidsonian article noted.

In 1984, a special Task Force on Racial and Ethnic Concerns issued a report reviewing conditions and issuing recommendations to improve the experience of black students at Davidson. The report and appendices became part of Project 87, a set of goals and activities to address issues by 1987. Another report in 1989 documented the progress and gaps.

Since the 1980s, significant progress has been made in integrating minority affairs into the fabric of Davidson College, by students, faculty, staff, alumni and trustees. The Black Student Coalition was organized in 1972, and has been particularly instrumental in this process. In keeping with their purpose: to “establish and maintain a spirit of solidarity among the black students of Davidson College; to effect awareness within the framework of Davidson College with regard to the contributions of black persons to the total environment of Davidson College; to serve as an active force ready and willing to support the black members of the Davidson community and aid them in overcoming adversities they may face; to provide an outlet for the social and cultural needs of black students; and to challenge Davidson College to become an embracing environment for black students and diversity as a whole” the Black Student Coalition has been a core participation in diversity awareness programs. 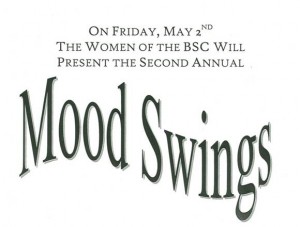 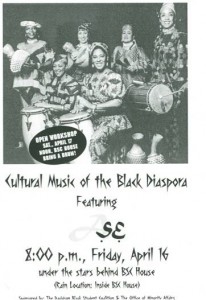 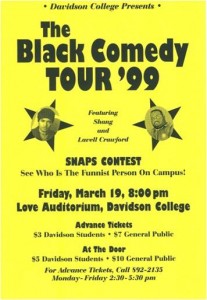 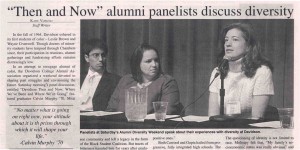 In 2002, a group of 40 students reflected on the question “What is it like to be a minority on Davidson’s campus?” in a forum organized by the Black Student Coalition. In this meeting, the fear was raised that “the minorities attending Davidson were admitted simply to keep up appearances of equality,” which was of course, a false assessment, yet is instructive that diversity awareness had a long way to go still at Davidson. Yet, the efforts to promote sensitivity to campus diversity awareness has certainly improved since the first admission of African American students in 1966, as a 2009 alumni panel explained. 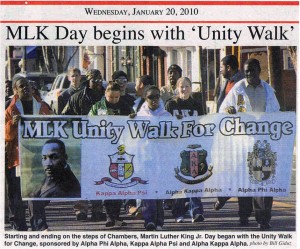 In addition to the efforts of the Black Student Coalition, the four historically black Greek houses (Alpha Phi Alpha, Kappa Alpha Psi, and Alpha Kappa Alpha, and Delta Sigma Theta) have been equally important in raising diversity awareness at Davidson. For example they organized a “Unity Walk For Change” to celebrate Martin Luther King, Jr. Day in January 2010. 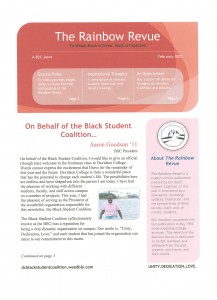 Most recently, in 2011, the Black Student Coalition reconstituted the Rainbow Revue, a student-run publication which had been defunct since 1996, to serve as its newsletter “providing updates, inspiration, and the perspectives of Black faculty, staff, and, of course, students.”