Coeducation at Davidson had its beginnings in the 1860s, when the five daughters of President John Kirkpatrick were enrolled to increase the size of a student body depleted by the Civil War. From that time on, faculty daughters and qualified ladies from the town were admitted to courses. However, they could not earn degrees
and were not afforded the full benefits of the college, such as dormitories, organized sports, or campus organizations. Many young women who began their college careers at Davidson transferred to Salem College or Queens. In 1901 Annie Brown completed all of the requirements for an A.B., but received only a certificate, not a diploma, from the school. In 1906, Gladys Summers completed requirements for a B.S. and received a certificate, but her accomplishment was officially announced at commencement. The end of the Second World War brought more women to campus, as wives of students returning from the war. The college provided housing for the families and an organization known as the G.I. Wives was formed as a social outlet for these women. 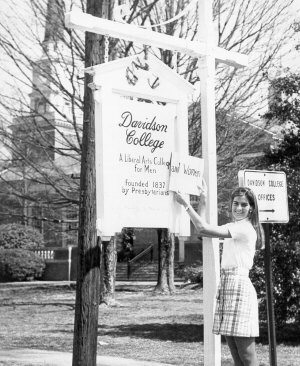 Davidson took its first true steps toward coeducation when, in 1968, President Samuel Spencer Jr. ‘40 appointed a special advisory committee to study the issue. The following winter, the faculty voted to participate in a college exchange program with Hollins, Mary Baldwin, Randolph-Macon, Sweet Briar, Agnes Scott, Winthrop, and others . The 1970-71 term was the inaugural year for the Student Exchange Program, and during that year, Davidson was host to female students who were housed in local homes. Although these women were exchange students, their presence on campus was seen by many as a bellwether of the coming shift to coeducation. Coeducation was the hot issue in the fall and winter of 1971-72, and the women who attended that year paved the way for the eventual arrival of coeducation. The women who were transfer students in the fall of 1972 were the first female degree candidates. Their high level of scholarship, service, and involvement in campus life was a key factor in the decision to make Davidson a coeducational institution. On May 5, 1972, coeducation came up for a trustee vote. Davidson admitted  upperclass women as students the following year as full degree-seeking candidates. Vicki Switzer ‘74 was the first woman to enroll following the trustee decision. Art major Marianna “Missy” Boaz Woodward ‘73 was the first woman ever accepted by Davidson as a full candidate for graduation. She later graduated with honors as the only female among 217 graduates.