Although Davidson college never owned slaves, slaves helped make bricks and build early campus buildings including the President’s house shown here. President Robert Hall Morrison did bring his personal slaves, Mary and Bagwell and their four sons, with him and his family to Davidson in 1837.

During the early years of the college , the college employed local slaves for low-paying work as servants, cooks, laundresses, and wood-cutters.

The first students at Davidson were to have limited interaction with the local slaves, as was the social norm in 1837. An 1837 letter, explained that students could be dismissed from the college for attending a mixed-race party. “I understood a week or two back that some of the students at Davidson had taken a general feast with Lemley’s Negroes and the faculty somehow or other got to hear of it and had them up and talked to them about it and in a day or two afterwards they put off. I did not hear who they were or whether they had come back or not.”

In their limited interaction, Davidson students were expected to show respect to the local slaves. Faculty minutes from December 1853 discuss the suspension of three students who started a fight by antagonizing slaves in a local store:

“That there was a wagon near the store, and several negroes, together with two young men by the name of Washam, near it. Two students, Rober A.H. Neagle and H. T. McDugald, in passing the wagon, accosted some of the negroes, telling them to take off their hats, and on their declining to do so, Neagle knocked off the hat of one of them; these two students then passed on into the store, where they met more negroes whom they accosted in the same way; and McDugald, with a stick in his hand, knocked off the hat of one of them.

The Faculty having deferred final action in the case till January 6, 1854, in order to become more fully informed of the facts, took up the case, and unanimously decided that Neagle and Kell and McDugald be suspended from the college till the close of the term.”

“1.First in the morning – make fires in the Chapel and recitation rooms
2.Making fires in students’ rooms
3.Carrying water to students’ rooms
4.Making beds and cleaning rooms of students. Carrying water to students’ rooms in the evening.
He is required to back boots and shoes for the occupants of the Halls on Tuesdays and Thursdays, and Saturdays, the blacking to be provided by the students.
He is not required to make fires for the students unless the wood is already cut and in their rooms
Mr. Alexander agreed to board and furnish lodgeing for the Servant and employ him about his premises when not engaged in College duties.” 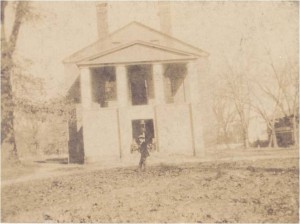 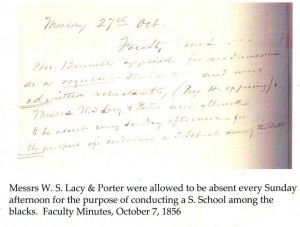 By the 1850s, the evidence suggests that the some interaction between African-Americans and the college population may have occurred–but only on Sundays. As the college chapel served as the local church, African-Americans did attend services there. This would not last, however; by 1855, separate services were offered by students and women of the town.

The census of 1860 includes information on the slaves held by college families but does not give us any names or skills. The 1860 census shows 21 slave owners with a total of 172 slaves in the area. The household of Davidson College President Drury Lacy was among these slave-holding families.

War came to Mecklenburg County on April 20, 1861 when a company of Charlotte Grays seized the United States Mint in Charlotte. For Davidson College, the war came mostly in terms of a series of losses.

According to President Kirkpatrick, “Up to the first of April, our students appeared to be diligently pursuing their studies, and but slightly affected by the political excitement pervading the country. A few days later, two of them . . . from the state of South Carolina, having previously enrolled their names in a Company . . . were ordered home by their Commanding Officer. . . . Their leaving the college under such circumstances of course created some excitement . . . until some ten days later, when the proclamation of the president of the United States . . . reached the college.

The excitement became intense and uncontrollable. Some made up their minds at once to enter the army . .  . some received orders from their parents to come home and join volunteer companies . . . some were called away to protect widowed mothers. There were only eleven students in regular connection with the college, six of the Sophomore class and five of the Freshman. Those of the Sophomore Class remained between two and three weeks longer, when they all withdrew and returned home. Those of the Freshman class remained at their studies about 2 weeks longer still, when they too left us. For nearly a month past we have not had a Student in this place.”

Despite the Emancipation Proclamation, no slaves were freed in 1863, and most continued their work as before. The introduction of new slaces, belonging to families seeking refuge here, caused problems when those families set the slaves to roaming the countryside in search of food. In response, the college passed a resolution that “negroes, all and everyone one (the College servants excepted) are prohibited from entering the college buildings at any hour, for any purpose, without written permission from the President or some member of the faculty.” (Faculty minutes 30 September 1865)