After the American Civil War, racial tensions and economic challenges still plagued Davidson. According to President Kirkpatrick, in 1866, “I can hardly give you an idea of the condition of things in our country. We are yet under military rule, which although we have not suffered directly from it . . . The Negroes are doing better than might have been expected. For a while they were perfectly crazy with the idea of being free. They are now much sobered down, and for the most part (at least in the part of the country) have gone to work to make a living. But they look miserable, many of them suffering for food and other comforts—some are trying to live by stealing, in which they are assisted by unprincipled white men, and in some places many have perished and more will perish for the want of the care which their masters once bestowed upon them, and which the Negro knows nothing of bestowing upon himself for his family. The Whites are so reduced that they cannot help the Negro, where they would desire to do so. It is as much as they can do to feed their own families; for last year the crops fell short through want of labour to work and gather them.”

According to the 1870 census, the total population of the township was 1605, with 975 white and 630 black residents including Davidson students. Although African-Americans had few choices in employment, they remained capable of creative responses to imposed limitations. Occupations for black males included day laborer, domestic servant, college waiter, blacksmith, and apprentice carpenter. The majority of women, black and white, were listed as keeping house. Forty-nine black women worked as domestic servants, seven as farm workers, four as washerwomen and three were attending school. Black women continued as cooks in the boarding houses and even free-lanced as cooks as students founded boarding clubs to stretch their budgets. 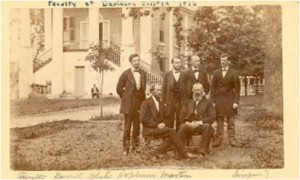 Many African-Americans left to find work elsewhere, leaving townspeople and area farmers to take on unpleasant tasks formerly assigned to slaves.  In 1871, professor William J. Martin complained to the college trustees: “In common with my neighbors, I find it difficult to keep myself provided with servants, and it has often been, during the past years, cause of serious inconvenience that the water from family use had to be brot from a neighbor lot.” The hauling of water was a difficult enough task that his family elected to “use water with an economy that is neither healthful nor pleasant.” 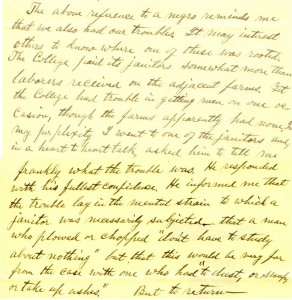 Professor William Carson, Superintendent of Grounds, asked one of the college janitors why the college was having so much trouble hiring servants, when it paid more than area farms.  The janitor informed Carson that “the trouble lay in the mental strain to which a janitor was necessarily subjected that a man who plowed or chopped ‘don’t have to study about nothing” but that this would be very far from the case with one who had ‘to dust, or sweep, or take up ashes.”  What Carson never understood that the “studying” referred to was about the difficulties of being under constant suspicion for any thefts or any slights.

Tensions were such in 1875 that students petitioned to “keep out of the College all colored persons to whom express permissions had not been given to enter or labor there. The petition was granted with an additional exception for those still attending church in the college chapel.  A few weeks later, two men, Jim Burton and George Wilson, were designated “colored persons worthy to be laborers about the College buildings and campus.

Over the next decades, African-Americans continued to work at the college providing essential services to keep the campus operating and they continued to experience tensions.

A few were singled out as exceptional citizens – for example, The Davidson Monthly reported in January 1892 that “Rev. Mr. Baker (col.) who has been the pastor of the colored Presbyterian church here for quite a number of years has accepted a charge at Lincolnton and in the future will make his home there. His removal is quite a loss to the students as he and his family were Davidson’s only tailors and they did their work well. We wish him well in his new field and can pay him no better compliment than to say that if all the colored race were as thrifty, as honest, as polite, and as courteous as he, our South-land would have much better prospects before her.”

Later that year, The Davidson Monthly reported that “Only a select few of our large number of colored citizens will be allowed the privilege of coming on the campus this year. The superintendent of grounds, Dr. Smith, has decided upon this as the best method to be adopted, as a preventive measure against trouble, in the way of petty thieving, etc., which arose last year . . . Among those favored, not including servants employed by the faculty for college work are: Holtsclaw, Rich Robinson, Alex Helper, Lewis Allison, Sydney Houston, and Ed Brown.”