My dearest Cousin Mamie should have had a letter before this, but I trust she will excuse my delay when she hears that I have been unwell for sometime, in the midst of numerous college duties. Cousin Mamie, your letter was truly a treat-I assure you that I enjoyed it much. Would that I could send you one so pleasant, but I am feeling dull and more than likely you will find this epistle much after the manner of my feeling.

The weather, for the past week, has been charming-real spring days. I enjoy it hugely. After the days work is over, we have about two hours for recreation, and it is, indeed, pleasant to take the arm of some kind, and confiding friend, for a walk in the twilight, for indeed, this is the loveliest time of the day. Then it is that the mind gathers many sweet and fond recollections, and recalls the happy hours of by-gone days.

We have more time for recreation, but it is not at a time that I enjoy it so much as in the evenings, therefore, I busy myself to be prepared to spend that time in taking exercise. Commencement[3] is about ten weeks hence. Would that it was next week-not that I am wearied of studying but I am anxious for the time to come when I will got from within these Classic walls[4] to the free open world. And yet, at the same time, such a thought is not pleasant in all respects.

The Societies[5] have elected their speakers and Marshals[6] for commencement occasions[7]. This excitement makes the time seem very near. I will send you an invitation[8] when they are printed and you will see all the names of the speakers and Marshals, though I expect they are all strangers to you, as there is but one from our part of the world, and that one is Latimer, (student) of Abbeville[9]. And I would be glad to have you here then. I think you would enjoy it muchly. Why not come?-the Air Line road[10] will be finished by that time, and it will not be too far. Come by Riedville and bring cousin Ella. I was sorry to hear of her sickness with the mumps-I hope she will soon recover.

Since the completion of the Air Line I will be prevented from visiting you all of Greenwood[11] next summer, in my route home. This much about it I don’t like, but then it saves a great deal in traveling expenses. How inconvenient it is to be poor!

I fully agree with you, as to your opinion of woman. She is indeed, a lovely piece of creation. Nor would I have you believe me to be such a queer soul as never to have loved a lass! Strange, indeed, is that man, who has in his soul, no love for woman. Though she causes often many a bitter pang, yet “Every bitter has its sweet. But I believe, I shall take the advice of my uncle[12]-“not to be exercised about a sweetheart just now-” for he has the experience doubtless of his youthful days to warn me of the folly. And then a sweetheart might get tired waiting for a student to complete his education and marry some other fellow. And this would cause him to exclaim in the language of the poet, “Tis sweet to love, But Oh! how bitter-To love a girl And then not git her. However one might get a sweetheart quite young who would not think it so long to wait until he could complete his education.

I will weary you no longer with such non-sense for I assure you I am “Scot Free, and a heart big enough to love all the girls. (Don’t tell any of them though, for they don’t allow a fellow to love but one at a time-selfish creatures). I was out at the Senior speaking[13] this evening. One member of the class, by name, Mr. Cocke[14], give us a speech on chickens-the subject was suggested by a young lady in town[15]. It was very amusing, created much laughter-nothing but wit throughout. The other speeches were nothing more than ordinary speeches. Miss Loula was out-looking quite pleasant. She receives considerable attention from the students. I delivered your message she said she would write you a note and put it in my letter-I told her this evening I would write to you tonight-she said you wouldn’t write to her and declined sending the note. Sends much love. Mrs. and Prof. Blake[16] are both well. I haven’t heard from uncle Hugh in sometime. I suspect you hear from him more frequently than I do. I hope he will get the churches he is visiting in Ga. Much love to all and a large portion for yourself.

Your own cousin, with much fondness, Jamie McLees[17]

P.S. Cousin Mamie I beg to destroy this letter. And please write to me soon. Return much love to Mr. Tefford. Tell him he might write to me first + not wait till I write.

[1] Davidson College was founded in 1837 as a Presbyterian, agrarian, and all male institution. The college is located in Davidson, NC about 22 miles north of Charlotte, NC. The town was incorporated as Davidson College in 1879 and in 1891 the town’s name was officially changed to Davidson. (Blodgett, Town of Davidson Site) 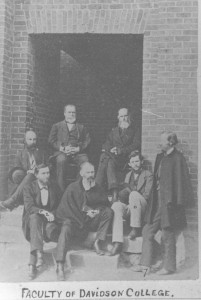 [2] This letter was written during the second semester of the 1872-1873 academic year. At this time there were 113 students and 7 faculty members. The head of the college at the time was the Faculty Chairman Professor John Rennie Blake. (DCC 6)

[3] Until 1881, the Eumenean and Philanthropic societies planned and paid for commencement ceremonies, except for the Sunday services. After that point, the trustees allocated of $50 for exercises. Eumenean and Philanthropic continued, however, to provide marshals to help coordinate commencement. Commencement was the college’s major social and public event. Extra trains ran between Charlotte and Davidson during the week. (Ivins) For more information on commencement at Davidson: https://davidsonarchivesandspecialcollections.org/archives/encyclopedia/commencement-at-davidson

Bible. New Testament in Greek, Harmony of the Gospels

Mathematics. Trigonometry and its Applications (Loomis)

[5] The Eumenean and Philanthropic Literary Societies were formed by students in 1837 as the first student organizations on the campus. Membership and eventual graduation from a literary society were integral parts of a Davidson student’s education in the early years of the college. Being a student at Davidson meant being a member of either the Philanthropic or Eumenean Literary Society. In the 1870s these societies were the social center of student life, embracing the ideals of brotherhood and providing the only form of student government in the college. (Sanchez) For more information about Literary Societies visit: https://davidsonarchivesandspecialcollections.org/archives/encyclopedia/literary-societies

[6] Commencement programs are believed to have been printed since the founding of the school, but the earliest known program is from 1842. (Ivins)

Orations by the Representative of the Literary Societies, 8 P.M. Wednesday June 25

[8] The Eumenean and Philanthropic Literary Societies began printing invitations for their own oratorical exercises in 1848. (Ivins)

[11] The town of Greenwood, S.C. was named around 1824 for the plantation of an early resident, John McGehee, “Green Wood. The history of Greenwood evolved around the development of the railroad. At one time, nine railroad tracks crossed through “Uptown Greenwood, Greenwood’s central business district. Greenwood got its first railroad, the Greenville & Columbia, in 1852 as an effort to locate the first track in Upstate South Carolina. Slowly by the 1930s and 40s, Greenwood became one of South Carolina’s leading rail centers. (City of Greenwood Site)

[12] McLees is probably referring to his uncle Hugh McLees, whom he mentions again later in letter. Hugh McLees, from Anderson County, S.C, was listed in the Davidson College Class of 1860. He entered Davidson in 1855 and continued until 1859. McLees went on to attend Columbia Theological Seminary in Columbia, S.C from 1859-1862. The South Carolina Presbytery ordained him a minister in 1863. (Covert, Lingle 76)

[13] These events were commonly held by the Davidson College Literary Societies. (Blodgett)

[14] Ellis Cocke (b. 1850) was a member of the Davidson College Class of 1873. From Asheville, N.C., Cocke entered Davidson College in 1869 and graduated in 1873. While at Davidson he was a member of the Philanthropic Literary Society. Upon graduation he began the study of law under Colonel Frank M. Fulkerson, of Rogersville, and was admitted in 1874. In 1875, he was elected county superintendent of public schools, and while in this office he spent his spare time practicing law, working in the upper East Tennessee criminal and Federal courts. (Lingle 97, Walters)

[15] The townspeople of Davidson frequently participated in and observed college debates and speaking events. (Blodgett)

[16] John Rennie Blake (b. 1825 d. 1900). From 1871-1877, Davidson College had no official president, but was administered by a faculty chairman, Professor John Rennie Blake. The position of Chairman of the faculty replaced the college presidency for those years. Blake was born in Greenwood, South Carolina and attended the University of Georgia and Harvard’s Lawrence Scientific School. Before coming to Davidson College, he taught at the Presbyterian Female School in Greensboro, Georgia, and LaGrange Synodical College in Tennessee. Blake was elected professor of Natural Philosophy at Davidson in 1861. In 1877, the Board of Trustees decided to restore the office of president. Since Blake was not an ordained minister and the constitution of the college then required that all presidents be ordained, Blake was not eligible for the presidency. He remained on faculty, however, serving as vice-president and teaching courses in Natural Philosophy and Astronomy until 1885. (Gillespie) For more information about Blake visit: https://davidsonarchivesandspecialcollections.org/archives/encyclopedia/john-rennie-blake

[17] James Andrew McLees (b. 1848 d. 1899) was from Anderson, S.C. He entered Davidson College in 1871 graduated in 1876. While at Davidson, McLees was a member of Eumenean Society. McLees wrote this letter sometime during the second semester of his second year on campus. Upon graduation he was a teacher in Fairview, SC. McLees attended the Student Columbia Theology Seminary in 1877. He went on to hold numerous positions as a pastor: Louisiana Church 1880, and since 1886 Valley Creek Church, Summerfield, AL. (Lingle 104, Fletcher)

“About us.” The City of Greenwood, South Carolina Website. N.p.